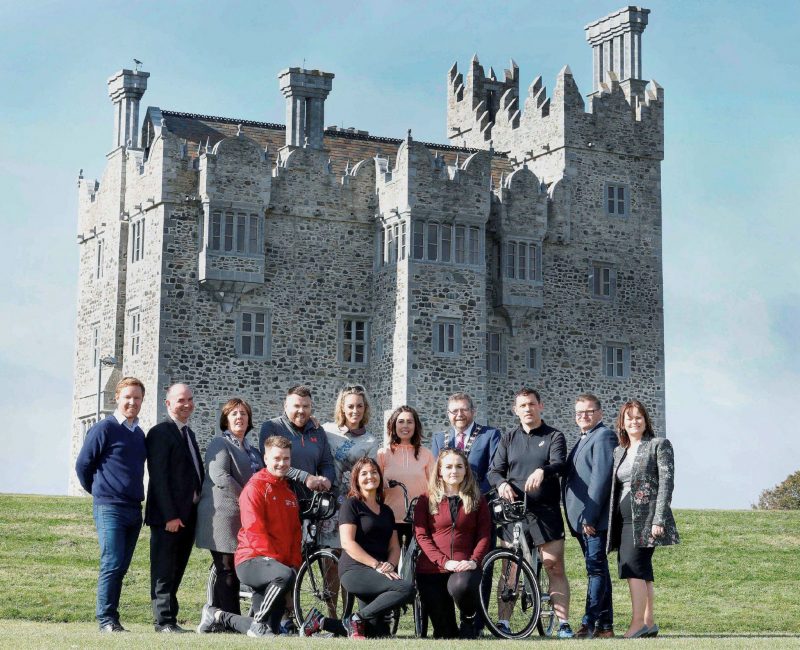 And so, comes the end of yet another season of the most-watched reality show in Ireland, Operation Transformation.

Each year OT brings huge emotion, belly-aching laughs and heaps of inspiration to Irish audiences all over the country, and 2019 was no different.

This season marks twelve years of OT and was especially exciting for the people of Balbriggan as the OT studio packed up and moved into Bremore Castle for eight weeks. Filming commenced in the seaside town and featured beautiful locations in and around Balbriggan.

Each week, Cathal Gallagher from Donegal, Pamela Swayne from Youghal, Paul Murphy from Galway, Siobhan O’Brien from Dublin and Jean Tierney from Limerick faced the scales while the whole nation held their breath.

By the end of filming in Balbriggan, the OT leaders were regulars in our sitting rooms with all of Ireland following the fit-five.

In honour of a very successful 2019 series, we’re taking a look back at some of the best OT moments in Balbriggan.

Before I park this year’s #OperationTransformation just a quick well done to all the team for an outstanding series. Was a joy and an inspiration to watch every week! Congrats to you all.

Who can deny the stunning location of the ad-break challenge! Set on the astro pitch beside Bremore Castle, the castle often took centre stage during filming of Operation Transformation.

Built in the 16th century, the castle was home to the Barnewell family. As time wore on the castle fell into disrepair, however, thanks to the work of Fingal County Council, the castle is being restored.

Operation Transformation’s Nationwide Walks, in conjunction with Sport Ireland and the Local Sports Partnerships, took place in over 80 venues across 26 counties and Balbriggan was no different!

The local community got into the OT spirit and took to the pavements, vowing to make 2019 their healthiest year yet. The whole town got out on a brisk Saturday morning for a beautiful walk around Balbriggan beach and coast.

In the spirit of Operation Transformation, the whole of Balbriggan is getting out and moving! Congrats to Bracken Educate Together on the start of their Walk on Wednesdays campaign! Students, teachers and parents all ditched their cars yesterday and took to the pavements to promote a healthier lifestyle. Well done kids! . . . . #balbriggan #operationtransformation #rte #walkonwednesday @kathrynthomasofficial @rteoperationtransformation @karlhenrypt @educate.together @balbriggan_chamber_of_commerce @kidshealth #instahealth #fitspo #newyear

To mark an amazing end to season twelve, the OT five led a 5k run around Phoenix Park with thousands of fans showing up to take part and cheer on the leaders. Huge crowds flocked to support the five, with many taking part in their first ever 5k run.

And finally, we can’t have an OT best moments without a mention of last night’s fantastic final catwalk. All our leaders rocked the stage as they strutted their stuff down the red carpet. Between them, the fab five have come on leaps and bounds not just on the scales, but in personal aspects of their lives also. Altogether, the leaders lost a combined weight of over ten stone!

There were a few tear-jerker moments throughout the series as usual but some really struck a chord with the people of Ireland. Limerick lady Jean stole the hearts of the nation this season with her story that resonated with many watching at home.

The Limerick woman became an inspiration for viewers when she spoke about her previous heartbreak – in 2015, she had an ectopic pregnancy; in January 2018, she gave birth to a baby girl named Sloane who sadly died five days after being born and last September, Jean had a miscarriage.

There was light at the end of the tunnel for Jean as during filming she became pregnant and returned last night to join her teammates for the finale. There wasn’t a dry eye in the house!

Wow Jean from Operation Transformation is amazing! Full of happiness even after all she’s been through…all the leaders are an inspiration #OperationTransformation

Leader Paul was hailed a hero when he opened up in week three about his struggles with mental health and stressed to other men “it’s good to talk”. The Sligo businessman said: “I nearly feel guilty for feeling down because I’m supposed to be the strong one.”

Paul is the eldest of three brothers in his family and took charge of his younger siblings after losing their father at a young age.

Donegal man and paramedic Cathal, the show’s heaviest ever leader,  started his OT journey at nearly 27 stone. In just eight short weeks Cathal is making amazing progress with a whopping weight loss of nearly four stone! His cardio results also improved by 40%, while his blood pressure and cholesterol are in the normal range.

Father-of-one Cathal may be a big guy but his was the softie of season twelve, wanting to better his health for his little daughter’s future.

And that’s a wrap on Operation Transformation in Balbriggan! We would like to thank the community of Balbriggan who were such great sports throughout the entire duration of filming. If we’ve missed any incredible moments of season twelve OT, let us know on Facebook!