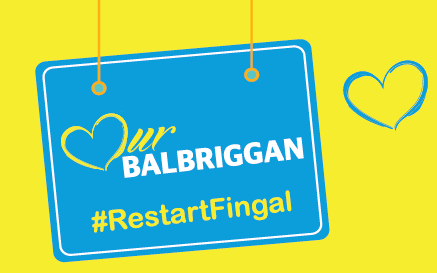 A campaign has been launched to support more than 250 businesses in Balbriggan, highlighting the important role played by local retailers in building a sense of community in the town.

Our Balbriggan’s Shop Local campaign has seen a brochure delivered to every household in the area.

The campaign also features a series of videos featuring local businesses across the Our Balbriggan social media channels.

Conceived before the second lockdown, the campaign has taken on an additional significance given the restrictions faced by local businesses.

Our Balbriggan’s social media team spoke to a selection of local businesspeople such as Yvonne Guest of Mayflower Vintage Floral Design, Hugh Devlin of the Cycle and Angling Store, Sam Kerrigan of Corrs Hardware, John Lyons from Goggin Insurance and Noel Heeney from McFadden’s.

Originally from Galway, Yvonne Guest opened Mayflower Vintage Floral Design on Dublin Street when she moved to Balbriggan – after she married a local.

“I love the people of Balbriggan. I’m here now quite a while now and I feel I have really settled in – everyone is so friendly. It is great to see the customers coming back time and time again,” she said.

“People just need to shop local and support the local businesses and keep it within your town, because if you want shops like this within the town, they need to be supported, now more than ever.”

Hugh Devlin’s Cycle and Angling Store on Balbriggan’s High Street was established 35 years ago – initially as an army supply store – by his dad and a friend.

“They changed it then into fishing gear and camping gear after a while, and then that’s when the bikes came into the business,” said Mr Devlin.

“Ever since it has been mainly focused on bikes with a little bit of angling and fishing on the side.

“Working in Balbriggan is great, I love the town. People in Balbriggan are very friendly, and they have supported our business for 35 years.”

Sam Kerrigan has worked in Corrs Hardware Store, which is located on Drogheda Street, for 47 of the 60 years it has been in operation.

Although no longer owned by the Corr family, the store is still a hub of advice for customers old and new.

“We provide a one to one business and we can spend time with customers, going through what they want and help as best we can,” he said.

“If people are looking for assistance from local carpenters or plumbers, for example, we put them touch with those guys.”